skip to main | skip to sidebar
Main page »(This is the live blog from 24 Hour Business Camp.) 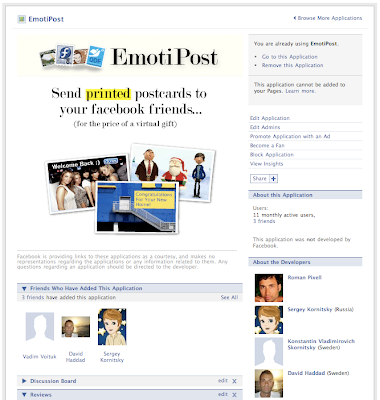 This presentation might come a tad late, but better late than never. We might still have a chance to score :P
We decided to create a Facebook App in order to piggyback on the user base of the world's largest virtual social network.
Imagine choosing a picture from your Facebook or Flickr photo album, entering your Grandma's address details and send the motive as a real, printed postcard. Yes, that's right - without having to find a postcard, stamp, pen or even a post box. And using your own pix never hurts, right? It's way cooler than the virtual gifts at Facebook, and it doesn't even require the recipient to be a Facebook user.
In the first version of EmotiPost we had to cut some corners, so the postcards can only be delivered in the US ... and can only be paid using a Swedish cell phone :P Right now, we're sticking to a small set of motives just to illustrate how the pictures can be chosen and test that the sending of postcards actually works.

We're working on ironing all the above mentioned issues, as well as Facebook and Flickr integration and a bunch of new features. What we also promise soon, is sending free postcards. Yes that's free as in free beer!

See ya'll at Friday (keep an eye on the main 24HBC blog!)